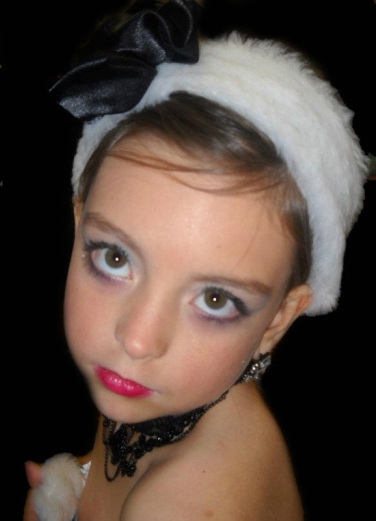 _Name: Kayleigh Autumn Taylor
Age: 8 1/2
Birthday: May 13th, 2003
Hometown: Dilliner, PA
Grade: 3rd Grade, Bobtown Elementary School
Pageant Bio:
Kayleigh has competed in pageants since she was 5 months old. Her first pageant was a small, regional pageant hosted by Sunburst at the Mountaineer Mall in Morgantown, WV and from there, her pageant career took off. Over the past 8+ years, she has competed in over 50 pageants, competing in Nationals for New Star Discovery in Richmond, Virginia for three consecutive years, winning National Champion Photogenic Product (all three years - first contestant to win consecutively in their pageant's history). Kayleigh typically competes in pageants in southern West Virginia for Southern Celebrity, WV Princess, and many others. Last February (2010), Kayleigh had numerous cameo appearances on TLC's Toddlers & Tiaras, an episode filmed in Bridgeport, West Virginia, entitled "Rodeo Princess Pageant", where the director brought in ponies for all of the pageant girls to pet/sit on during competition. At this pageant, Kayleigh was crowned one of the two highest point award titles: Marion County Rodeo Princess (Double County Title Pageant) It was a great time! More recently, Kayleigh competed in Southern Celebrity's "Fairytale Celebrity Pageant", which was winter/Christmas themed and also filmed for an upcoming episode of Toddler's & Tiaras. For this pageant, Kayleigh competed in her first-ever Belgin Boutique wear "Vintage Winter in Paris" as seen in her profile picture...the most elegant, beautifully hand-crafted outfit she has ever owned. It is absolutely breathtaking! It be be a near impossible feat to list all of her winnings; however, Kayleigh has collected hundreds of trophies, sashes, and tiaras; everything from National Ultimate Grand Supreme/Champion titles, Division Queens and Princesses, Optional Categories of Best Dressed, Best Personality, Best Holiday/OOC wear, Prettiest Hair/Eyes, the list goes on and on. Kayleigh's favorite pageants are those which are holiday themed and she always excels in photogenic categories. Most importantly, Kayleigh authentically loves competing. Her provides her a sense of self-confidence and worth; she is a strong competitor and always does her best, regardless of what title she wins. As a family, we like to keep it light-hearted and fun!

Travel/Leisure: This past summer, Kayleigh traveled with her Mommy and Grandma to Paris, France. Kayleigh's Mommy, Amy, has studied the French language for the past 16 y nears and it was a vacation of a lifetime! Kayleigh has been learning French since she was born and became a pro at saying "Merci" and "Bonne Nuit" while in France. Every evening, she would sit out on the balcony of the flat, spread her French cheese on crackers, and adore the nearby sparkling Eiffel Tower in the warm summer breeze. With this, Kayleigh LOVES pageant outfits that have a Parisian feel to them. While in Paris, Kayleigh climbed the Eiffel Tower, the Arc de Triomphe, visited the Louvre, the Army Museum & Napoleon's Tomb, went on a dinner cruise down the Seine River, lit candles in Cathedrale Notre Dame, shopped in stores such as Louis Vuitton and Sephora along the famous Champs-Elysees Avenue, took a day trip to Disneyland Paris, enjoyed picnics with Mommy in Parisian parcs and beaucoup des croissants, chocolats et du cafe...it was amazing! Kayleigh hopes to travel back to France very soon! She shares her Mommy's interest in the French culture and language and hopefully will continue to express this in her pageant wear!
When she grows up, she wants to be a dolphin trainer at Sea World.
Parents: Amy Conway and Lance Taylor
Proud Grandparents: Richard & Candace Garrison of Dilliner, PA; Robert & Tammy Taylor of Morgantown, WV; William Conway & Robin Bonnette of Martin, PA